Edit
watch 01:40
The Sandman Will Keep You Awake - The Loop
Do you like this video?
Play Sound

Julia Lepetit was born in Long Island, New York, U.S.A. to Eileen Lepetit and husband Eric Lepetit on March 12, 1989. She is French American, uses she/her pronouns, and was born deaf, remaining that way until around the age of eight, whereupon she underwent surgery to get her adenoids removed. As a formerly deaf child, she once recounted on the Drawfee Twitch Stream how difficult it was learning English in her early years. Her parents speak French around the house, but they decided not to teach her after she got her hearing because she had to learn English as well. As a result, she is conversational in French at best, but not fluent.

Julia, her brother Mike, and their dog Scout spent the majority of their childhood in New York with very little money. Nonetheless, they were still able to receive a proper education, eventually allowing Julia to go on and enroll in the Fashion Institute of Technology (2011) with a degree in Illustration.

After graduating college, Julia got an internship for Dorkly and was hired thereafter as the Managing Editor and Head Illustrator, working alongside Andrew Bridgman. She was a regular guest on the Drawfee channel; her appearance on "Special Guest - DRAWMBAT" was the first guest appearance of anyone on the show.[1]

On March 19, 2018, Julia announced that she would be joining Drawfee as a full-time host. She became the General and Community Manager, leaving her position at Dorkly after 8 years.[2]

When Drawfee became independent on July 2, 2020[3], Julia became the Manager for the channel, handling most of the financial and administrative work.

On the show, Julia draws on her likes, hobbies, and artistic background, such as her fashion school education and her interest in the Muppets and watchmaking.

On December 21, 2018, Drawfee co-host Jacob announced via Twitter that he and Julia were dating.[4] The Tweet in question features a selfie with the two leaning against one another with the caption reading, "Happy Holidays, we're dating." The two got engaged on August 6, 2022 and announced the news first on their Twitch stream on August 7, 2022, and then via Twitter.[5]

In late 2019, Jacob and Julia rented an apartment together in Brooklyn and, on December 13, 2019, announced the adoption of their two cats, Joy and Olive (whom the Drawfee Crew have affectionately dubbed "The Producers" in lieu of any actual management). 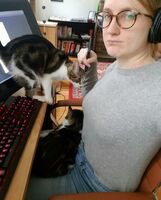 Julia and The Producers. 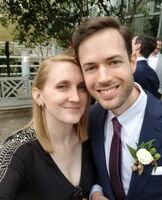 Julia and Jacob at a wedding. 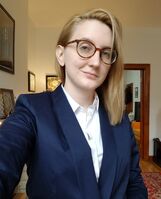 Julia in a suit.

Community content is available under CC-BY-SA unless otherwise noted.
Advertisement